Review: The Haters by Jesse Andrews 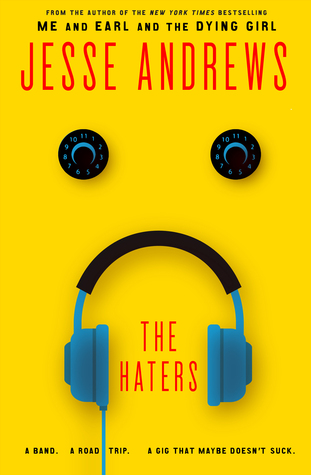 From Jesse Andrews, author of the New York Times bestselling Me and Earl and the Dying Girl and screenwriter of the Sundance award–winning motion picture of the same name, comes a groundbreaking young adult novel about music, love, friendship, and freedom as three young musicians follow a quest to escape the law long enough to play the amazing show they hope (but also doubt) they have in them.
Inspired by the years he spent playing bass in a band himself, The Haters is Jesse Andrews’s road trip adventure about a trio of jazz-camp escapees who, against every realistic expectation, become a band.

For Wes and his best friend, Corey, jazz camp turns out to be lame. It’s pretty much all dudes talking in Jazz Voice. But then they jam with Ash, a charismatic girl with an unusual sound, and the three just click. It’s three and a half hours of pure musical magic, and Ash makes a decision: They need to hit the road. Because the road, not summer camp, is where bands get good. Before Wes and Corey know it, they’re in Ash’s SUV heading south, and The Haters Summer of Hate Tour has begun.
In his second novel, Andrews again brings his brilliant and distinctive voice to YA, in the perfect book for music lovers, fans of The Commitments and High Fidelity, or anyone who has ever loved—and hated—a song or a band. This witty, funny coming-of-age novel is contemporary fiction at its best.

The Haters by Jesse Andrews promised a band and a road trip.  And, well…it did deliver on both of those things, though not without some frustrations along the way.

I am a fan of Jesse Andrews, though his books often leave me feeling very torn.  Me and Earl and the Dying Girl is one of the only books that I’ve read and actually thought was hilariously funny.  However, it did reach a point where it felt like too much.  What was funny at first just became frustrating and repetitive eventually.  And I feel like this is what happened with The Haters.

At the start, I was laughing and having a great time.  But, as it goes on, you realize that it really is never going to stop.  His characters are sarcastic and self-depreciating and it starts out as funny.  But, it’s in such a high concentration that you can only take it in small doses.  The characters’ personalities are all amplified by 1000%.  By the end, I’m left feeling that it’s just too much.

I liked the musical aspect of The Haters.  I feel like there aren’t a lot of YA books that center around music or bands and I loved that.  I also loved the road trip aspect.  Road trips are just amazing, guys.  I really appreciate what he was trying to do with this book and I really loved the main subject and plot.

I think a big part of this was that I didn’t really connect with any of the characters.  The MC was a teenage boy and I’m sorry, I just couldn’t relate.  Not that teenage boys can’t sometimes be relatable, but in this context and these boys?  Nope. There just wasn't anything I could connect to, relate to or understand about them. Him and his best friend made dirty jokes and talked about their dicks all the time and it was just too much.  Even Ash, the girl character, I felt really could have used some more development, because I felt like we still didn't know much about her or her personality. You would expect that through the experiences these characters share and all the time they spend together, you'd really get a feel for who they are.  However, I didn't feel that and I don't really think that the characters really ended up growing closer and knowing much more about each other.

Also, for being a band their communication was terrible.  They never talked much about their music.  They didn’t practice.  Their goal was just to drive around and randomly ask around in hopes of being able to play a show somewhere.  Because that’s surely how you become a successful band, right?  And sometimes I wonder if that’s part of the joke.  If the point is that they’re young and stupid and doing everything wrong.  Being in a band isn’t just like “it’s okay if we suck, if we play in enough places, we’ll just get good.”  No.  You need to be able to play together and contribute creatively to songs that you write together.   It’s not just you deciding to play a bunch of random crap with two other people and saying “Okay.  We’re a band!”

I liked the adventures and all of the stupid things that happened to them.  I liked all of the dumb places they played and all of the people they met.  I enjoyed that part of the book so much. Where this book got really…not fun was all the stupid drama. I didn’t like the drama of both Wes and Corey wanting to hook up with Ash.  Just because she’s a girl they have to both instantly want her?  Throughout the book, you have to deal with them bickering and arguing and just not communicating properly.  And it’s made even worse when something happens with Corey and Ash that causes Wes to act jealous and aggravating for the rest of the book.   I just felt like they should have grown much closer through their trip and worked things out, but I feel like things in that department never moved forward.

I wanted to be able to enjoy the music and the road trip, but was left feeling frustrated by all of the  unnecessary drama.  They felt like a bunch of children who were always throwing tantrums about something.  Mix in the a) dumb decisions b) constant unjustified pining/jealousy for Ash c) drug highs and d) drunk teenagers, and you begin to understand why I got frustrated with The Haters.

Even through all of this, I was satisfied by the ending.  I feel like finally at the end, the characters got some of the things that I wanted them to realize and appreciate.  They understood the process of making music and what it meant to be a  "band".  They were somewhat more matured and could look back and think "We actually didn't sound that great together.  What were we doing?"  And they were finally on a path towards writing and creating their own music that they could be proud of.  So, I won't say that the chracters didn't change or learn at all from their experience.  Because they did.  However, you just don't really get to see that until the end.

Despite some of the negative points of The Haters, Jesse Andrews is still one of the only authors who can make me laugh out loud.  I was reading his website earlier today and cracking up.  He's just that hilarious.  There were parts in the book where they actually "hate" on stuff.  Like bands, songs, or potential band names.  And I loved those parts.  But, I feel like he makes his book humor super dirty and teenagery when he’s hilarious already.  I’m not going to say that I don’t recommend this book.  Because there were parts that I really like and aspects I enjoyed.  I love Jesse Andrews' writing and his books are so easy to fly through.  I did, however, have a lot more negatives with this one than I expected.  All in all, If the premise intrigues you or you're a previous fan of Jesse Andrews, give this one a shot. 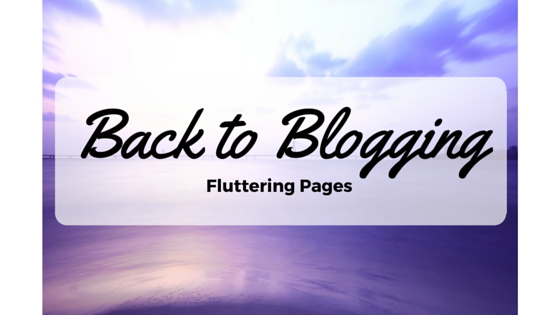 Life.  It’s wonderful, but sometimes certain aspects of it get in the way of us doing things we like to do.  Work, School, or Family can keep you so busy that it’s hard to have time for anything else.  And unfortunately for me, when that happens, other things in my life get cut out.

I’m in my last couple months of high school and life has been absolutely crazy for me.  And it’s not only blogging that suffered.  I’ve really been thinking lately and I realized that so many things I used to do have fallen to the wayside. It got to the point where I spent -zero- free time doing anything like reading or blogging, or even any hobbies in general.  My reading has dropped drastically, and some months, I was barely reading at all.  For someone like me, that’s a big deal.

Blogging is something that I love and want to continue doing into the future.

Lately, I’ve made a sort of personal resolve.  I really need to start doing more things that I love again.  I love writing posts.  I love blogging in general.  And I love reading.  Yet, those things that made me so happy got cut out.  Well, I’m putting them back in.  Life is stressful sometimes, but I’m not going to let those things that bring me joy leave my life.

I just wanted to put this out there and say that this is something that I’ve been thinking about a lot lately.  It’s something that I’ve noticed has happened in my life and it’s not good and I don’t like it.  So, I’m going to change it.  This blog isn’t just a place for me to review books, but it’s somewhere that I can express myself.

Has anyone else found that this is happening or has happened to them?

PS: I’m going to shoot for a post every Friday, until I can really take off with it again.   And hopefully I can finally learn how to schedule blog posts instead of doing everything last minute.  J