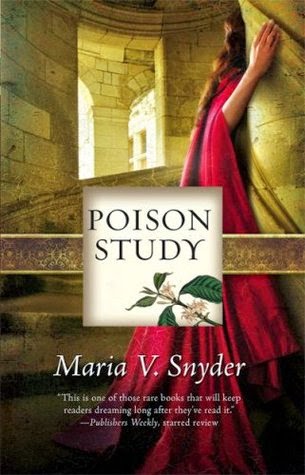 What is Poison Study about?

About to be executed for murder, Yelena is offered an extraordinary reprieve. She'll eat the best meals, have rooms in the palace—and risk assassination by anyone trying to kill the Commander of Ixia.

And so Yelena chooses to become a food taster. But the chief of security, leaving nothing to chance, deliberately feeds her Butterfly's Dust—and only by appearing for her daily antidote will she delay an agonizing death from the poison.

As Yelena tries to escape her new dilemma, disasters keep mounting. Rebels plot to seize Ixia and Yelena develops magical powers she can't control. Her life is threatened again and choices must be made. But this time the outcomes aren't so clear…

The plot of this book is something that grabbed me right away.  Throughout reading Poison Study, it kept reminding me so much of Throne of Glass.  Reading the book was like a roller-coaster ride. The action never stopped, and there was always something going on at the castle. I feel like this is one of those books where knowing too much about the plot kind of ruins it. Don't get me wrong, this book would be incredibly fabulous in any situation. I just think that when you read Poison Study, you should go into it not really knowing too much about it. Just be prepared to experience an amazing story, and fall in love.

Yelena is one of the strongest female characters I've ever come across.  Yelena has quite a troubled past, which you discover more about as the book progresses. The bottom line here is, though, that even despite everything that happened to her (which is horrific) she is still fighting.  At the opening of the book, Yelena is supposed to be executed. By being offered this position as the Commander’s food taster, Yelena is given a second chance.  Considering her past, Yelena should be broken. But I think it is a testament to just how strong Yelena is, that she came out of it stronger.  Throughout the book, Yelena gets into her fair share of trouble. But she learns how to fight back and is one of the most kick ass female protagonists I've ever read. So, not only is she physically strong, but mentally and emotionally. Physical strength isn't everything, and I think that being mentally strong is even more important. To top it all off, Yelena is so smart. There we many times in this book where I was thinking "Yelena is a genius!"

The world of Poison Study is intriguing, yet scary. They live in this very strict society where there is a law or a rule for everything. And no matter what, those laws cannot under any circumstance be altered.  There is an absence of decoration and design, creativity and art is not encouraged. Magic is strictly forbidden in Ixia. And they have gone 15 years in that castle without a feast. So, yeah, it's not the most fun place. However, there is gender equality, which is really great.  The women are given equal opportunity, and it is common to find a woman in a position of power. It is even said several times that it is more likely for a powerful magician to be female. So, that aspect of the society was really awesome, because sometimes in fantasy books, it's not always that way.

This is another book that I loved the all of the characters in.  Well, almost all of them.  Yelena forms close friendships with several people in the castle, and they all help her to improve in some way.  The different friendships she forms really help Yelena’s character development and progression.  Valek is the Commander’s right hand man, and the top assassin in the land.  He trains Yelena in her food testing and always seems to be around when you need him (even though Yelena can usually take care of herself).  She also becomes friends with Ari & Janco, two of the soldiers the commander’s barracks.  They are so sweet, and willing to help Yelena with pretty much anything.  While Yelena’s history and position may not be the best, there are multiple characters in this story that really reach out to Yelena and help her.  I appreciated that Yelena developed this strong support system, and that she was able to have people to support her.

Poison Study has captivated me with its complex world, incredible characters, and magnificent story.  Sometimes, when I finish a book, I just KNOW that it will become one of my new favorite series.  That is the case with Poison Study.  I honestly have nothing negative to say about Poison Study - I loved every second of it.  So many aspects of it and stuff in it are things that I love in books, that it feels like this book was written just for me.  My only regret is that I hadn’t read it sooner.  I will definitely be continuing on with Yelena’s story, and I can’t wait to read the rest of the books in the series.

Have you read Poison Study?  What were your thoughts?  Have you ever met the author, Maria V. Snyder?